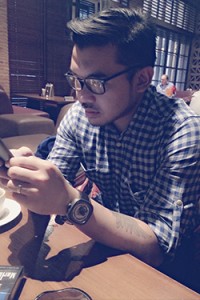 Giovanni Panaka is a professional currently working in the oil and gas industry. He used to be active in the Indonesian music industry, where he worked for about 10 years as a session player for numerous artists.

He was part of Erwin Gutawa Orchestra, playing actively in various main events from 2007-2011, and was part of the New Karimata Project, initiated by Erwin Gutawa and Aminoto Kosin, members of the original Karimata, a legendary Indonesian jazz-fusion instrumental band. His early formal music education started in 1993 with Yamaha Electone and classical piano lessons. As time progressed, he found his passion in Jazz genre at the age of only 11. He entered Farabi Music School in the non-classical program from 2002-2006, where during the time he also teach private lessons and regularly performed in several cafés, such as Starbucks, Oranye Lounge, Blackcat, Twilight Café, etc.

He met Bun Sentoso in 2009 due to their same passion in Photography, and it didn’t take long until they figured out each other’s hidden talent, and decided to found a band focusing in events, which is now called Untitled.