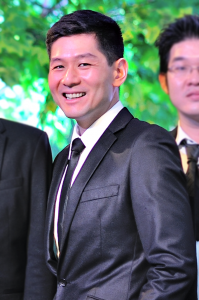 Bun Sentoso is a full time business professional in the oil and gas service and downstream industry by day, yet eagerly puts on his musician cape by night, hoping to release some fume in the process . Early in his childhood, his parents put him through 8 years of piano school and 6 years of guitar school at YPM (Yayasan Pendidikan Musik), but instead, he fell in love with singing‎ much later in his life after rediscovering the joy of music through the David Foster’s beautiful arrangement of Frank Sinatra’s era music in Michael Buble’s repertoire.

Some would know Bun Sentoso as a wedding/pre-wedding photographer, with his Indio Photography team kicking up the industry between 2008-2010. But as his daytime professional career was on the rise, Bun had to give up his love for photography. Still needing a stress-releasing activity, Bun then founded the band with Giovanni Panaka, whom he met in his photography years, in 2010. With the band now steadily growing, Bun is enjoying the balance of his career and his passion for music with the Untitled Band.